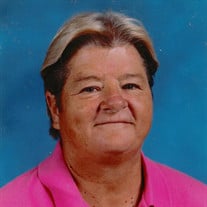 Gloria Ann Jackson, 60, passed away peacefully at her home on Sunday, March 20, 2022, surrounded by family and friends. Born in Latta, SC, on February 12, 1962, she was the daughter of the late George Ellis Jackson and Chancie Hatchell Jackson. She built a beautiful life for herself and those around her. She devoted herself to the community and to her country, serving three years in the United States Army. Ann grew up in her beloved town of Latta and graduated from Latta High School Class of 1980. She continued her education at Francis Marion University and Mars Hill College where she played on the girls’ basketball team. She was an avid sports fan and enjoyed cheering on her favorite sports team, the South Carolina Gamecocks at every home game for years. Ann coached and cultivated thousands of children on and off the field. She served as the Recreation Director in Latta for 10 years and in Marion for 2 years. She served as head coach of the J.V. girls basketball team in Latta and the assistant coach of the girls’ basketball team at Latta High School, and coached travel softball for 10 years. She worked for a while as a substitute teacher, and eventually went on to aid in high school and middle school special education. Ann’s love for being involved with young people was evidenced in her roles as a coach and teacher. She will be dearly missed by all who loved her. On Wednesday, March 16, 2022, Ann was recognized for her many years of service and generosity by being inducted into the SC Dixie Youth Hall of Fame. She is survived by her loving partner, Holly Bell of the home; her daughter, Hannah Jackson of the home; two special nephews, Jayden and Noah Alford of the home; sisters, Frances Hayes of Latta, Patricia Beckwith of Florence, Vonda (Johnny) Miller of Latta, Elaine (Phil) Hester of Supply, NC and Linda (Don) Clark of Latta; a brother, Theron (Pat) Jackson of Latta; also by numerous nieces, nephews, and other relatives and friends; an inherited brother, Ricky Bryant of Latta; and her fur babies, Ari, Sonny, Minnie, and Charlie. Funeral services will be held 2:00 P.M. on Wednesday, March 23, 2022, at Union Baptist Church in Latta, directed by Stoudenmire-Dowling Funeral Home. Burial will follow at the Catfish Creek Baptist Church Cemetery in Latta. Visitation for family and friends will be held 6-8PM on Tuesday, March 22, 2022, at Union Baptist Church, 7231 Old Ebenezer Road, Latta, SC 29565. Memorials are suggested to: The American Cancer Society, PO Box 11796, Charlotte, NC 28220. If sending flowers, please have them sent to Union Baptist Church, 7231 Old Ebenezer Road, Latta, SC. Ann was preceded in death by her parents listed above; brothers, John Jackson, Roger Jackson, Billy Ray Jackson, and James Bert Jackson; sister, Joan Elizabeth Norton; and by brothers in law, Ervin Norton, Carl Hayes and Howard Beckwith.

Gloria Ann Jackson, 60, passed away peacefully at her home on Sunday, March 20, 2022, surrounded by family and friends. Born in Latta, SC, on February 12, 1962, she was the daughter of the late George Ellis Jackson and Chancie Hatchell Jackson. She... View Obituary & Service Information

The family of Gloria Ann Jackson created this Life Tributes page to make it easy to share your memories.

Gloria Ann Jackson, 60, passed away peacefully at her home on...

Send flowers to the Jackson family.