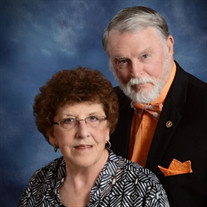 Edna Smith Phillips, 76, passed away on Monday, April 18, 2022. Edna was born as the 4th daughter of Claude O. and Louise L. Smith on January 3, 1946 in the Conway hospital, Conway, SC. They lived in the White Oak section of Horry County between Conway and Loris, SC. She had 4 brothers and 3 sisters. All of the daughters grew up to become nurses. She began nursing school in 1965 and graduated in 1966. Edna was a nurse for 45 years, first at Saunders Memorial Hospital in Florence, SC. She met Victor Dewey Phillips while in nurses training in June of 1965. They dated until August 26, 1966 when they married. They lived in Florence until February 1967 and then moved to Dillon, SC. They lived at 1101 N 6th Avenue in Dillon. Edna worked for Dr. Howell in Latta, SC until March 1973 when they moved back to Florence. While in Dillon, their daughter Melinda Dawn Phillips, was born on April 2, 1969. After moving back to Florence, their son, Mark Christopher Phillips was born on June 30, 1974. Edna went back to work as a nurse at Florence General Hospital and was employed there until it moved to Carolinas Hospital on the Pamplico Highway in 1992. She retired in August of 1994. Not satisfied with retirement she went back to work as a nurse for Dr. Joel Dekle and worked there for 12 years when she retired for the second and final time. Edna was active in Unity Baptist Church until 2005 when she was diagnosed with breast cancer. After her radiation treatments she resumed her participation at church. Edna and Vic purchased a second home in Surfside Beach and frequently were there enjoying the beach. In 2018 Edna was diagnosed with ovarian cancer and went through the chemotherapies followed by surgery and other “maintenance” treatments. She maintained her activities until 2022. Edna was preceded in death by her parents; brothers, Frankie Smith, Brooks Smith, Elwood Smith; sisters, Geraldine Lemler, Earline Knowlton and Claudine Robertson. Surviving are her husband, Victor Dewey Phillips; daughter, Melinda (George) Corley of Loris; son, Mark Phillips of Friendfield, SC; grandchildren, Phillip Purvis and Christopher Purvis; great grandchildren, Michael Purvis, Caleb Purvis, and Madelyn Grace Purvis; brother, Hoyt Smith of Loris. Memorials may be made to Unity Baptist Church. The family will receive friends from 1PM to 2 PM, Saturday, April 23, 2022 at Unity Baptist Church followed by a funeral service at 2:00 pm. Internment will take place following the funeral service in Florence Memorial Gardens directed by Stoudenmire-Dowling Funeral Home. Please send messages to the family at the obituary section of www.stoudenmiredowling.com.

Edna Smith Phillips, 76, passed away on Monday, April 18, 2022. Edna was born as the 4th daughter of Claude O. and Louise L. Smith on January 3, 1946 in the Conway hospital, Conway, SC. They lived in the White Oak section of Horry County between... View Obituary & Service Information

The family of Edna Smith Phillips created this Life Tributes page to make it easy to share your memories.

Send flowers to the Phillips family.