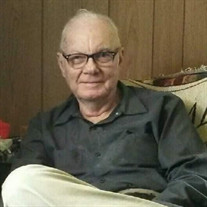 Donald Clark Grimsley, age 84, of Marion was born November 2, 1936 and passed into the loving arms of Jesus February 20, 2021 at MUSC Florence Regency Rehabilitation Center. He was the son of Warren Lonnie Grimsley and Bertie Wilkes Grimsley, brother of Hubert Grimsley deceased, Reverend Lonnie Grimsley Jr., Dorothy Grimsley deceased, Margaret Grimsley Strickland, Lazette Grimsley Morris, and Paul Grimsley. He was raised in Coward SC, graduated JC Lynch High School in 1955, and attended Florence School of Business graduating in 1958 with an Associates degree in Business. He married his bride of 62 years, Ellen Sarah Allie Ferrell Grimsley on December 21, 1958. They had 5 children together, Donna Marie stillborn 1960, Donald Leroy Grimsley died November 15, 1994, Ellen Angelia Grimsley Deas (Butch), Sharon Belinda Boomer (Harold), Jonathan David Grimsley died February 12, 2018 and had numerous grandchildren and great-grandchildren. He was a Navy Veteran and served in the Marion Jaycees. He worked for Frito-Lay Inc for 32 years earning numerous distinguished service awards. He retired in 1991. Post retiring he worked for Wells Fargo as a security guard and Beneteau as a night watchman. Mr. Grimsley was a well respected member of the Penderboro Community where he resided until his death. He was known to be a man of his word and he let his actions speak for him. He grew up being active in the 4H club and passed that on to his children. He was an active member of the Woodmen of the World. He was known to be a hard worker and a man of strong ethics. He attended the Marion Church of God and grew to love Jesus accepting him as his personal savior. Arrangements are being made by Stoudenmire-Dowling Funeral Home in Florence. He will be laid to rest at Camp Branch Pentecostal Holiness Church Cemetery in Scranton, SC on Thursday, February 25, 2021 at 3 pm in a graveside ceremony. Pastor Wayne Varnadoe will be officiating. (COVID-19 precautions in use please). Following the service a meal for family and friends will be offered at Florence Church of God of Prophecy Fellowship Hall, 426 Church Street in Florence, SC at 4:30 pm. In lieu of flowers - donations to the American Cancer Society.

Donald Clark Grimsley, age 84, of Marion was born November 2, 1936 and passed into the loving arms of Jesus February 20, 2021 at MUSC Florence Regency Rehabilitation Center. He was the son of Warren Lonnie Grimsley and Bertie Wilkes Grimsley,... View Obituary & Service Information

The family of Donald Clark Grimsley created this Life Tributes page to make it easy to share your memories.

Send flowers to the Grimsley family.