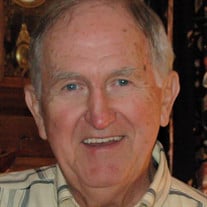 William Gantt Sawyer (Bill), 93, died on Thursday, November 25, 2021 at McLeod Hospice House in Florence, South Carolina. Bill was born on August 3, 1928 to William Purvis Sawyer and Ruby Gantt Sawyer in Ridge Spring, South Carolina where he enjoyed a childhood that inspired many wonderful family stories of working in a peach packing facility and a funeral home, and meeting many new people in the years his home filled the need of being a local boarding house. Bill attended school in a small but wonderful community. He often spoke fondly of his friends, teachers, and administrators in the Ridge Spring and Monetta communities, where he had opportunities to play any sport for which their school could field a team. Bill graduated from the University of South Carolina in 1950, and served in the US Army at Fort Jackson for 2 years. After serving in the Army, he began his banking career in Columbia, SC, where good times were had and lifelong friendships were made. Banking took Bill to Sumter, SC, where he met and married his sweetheart, Madeline McMasters. The couple moved to Florence, SC where they raised their two children, and Bill continued his long career in banking. An avid golfer, occasional penny poker player, and engaging people person, Bill thoroughly enjoyed spending time sharing stories and laughs with friends and family, and having great times on the dance floor with his bride. He served Florence Kiwanis Club as treasurer and past president, twice received Kiwanian of the Year and was named a George F. Hixson Fellow. Bill also enjoyed serving on the Salvation Army board, and serving as treasurer of Central United Methodist Church, his church home for over 30 years. Bill was predeceased by his sister, Mable Sawyer Jenks, and his brother-in-law, Colonel Harford Perry Jenks, Jr. Bill is survived by his beloved wife of 58 years, Madeline; his son, Gantt (Davis) Sawyer; his daughter, Honor (Phil) Bonds; his sister-in-law, Gretchen McMasters; his grandchildren, Benjamin Bonds, Emily Bonds, McMasters (Mac) Sawyer, Elizabeth Sawyer, and by many nieces, nephews, and cousins. Bill’s memorial service will be held at Central United Methodist Church on Monday, November 29, 2021 at 2:00 pm, directed by Stoudenmire-Dowling Funeral Home. Visitation will follow the service in The Commons of the church. Memorials may be made to McLeod Health Hospice at P. O. Box 100551, Florence, SC 29501 or Central United Methodist Church at 265 West Cheves Street, Florence, SC 29501.

The family of William Gantt Sawyer created this Life Tributes page to make it easy to share your memories.

Send flowers to the Sawyer family.