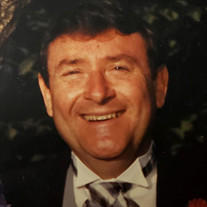 William Perry Brinkley, affectionately called Bill, found complete healing in his Savior on Tuesday, January 25, at the age of 90. Born in New Bern, NC, on June 11, 1931, he was son of William Alexander and Adelaide Susan Jenkins Brinkley. His gracious smile, gentle spirit, and patience throughout his long journey of suffering will be long admired and remembered by those who knew him well. Bill was a thirty-four year faithful member of his beloved church, Florence Baptist Temple, where he served as an usher for many years, until he became disabled in early 2012. He was employed for twenty-five years with McLeod Regional Medical Center, until he retired in May, 2008. Previous to his employment with McLeod, he worked with Greenville Memorial Hospital Systems in Greenville, SC, from July, 1976, till July, 1984. He was also the co-owner and vice-president of Household Moving and Storage, Inc. New Bern, NC, from February, 1961 till June, 1976. In February, 1961, Bill retired from the United States Air Force after serving two terms. He was honored with various awards and proudly served his country in South Korea during the Korean Conflict. Bill had a number of hobbies throughout his lifetime. He became an avid reader during his retired years; he especially enjoyed reading the works of a number of Christian authors, but the book he enjoyed the most was his Bible. He loved horses, and he taught riding lessons while living in Greenville, SC. Music was a source of much joy for Bill. Sacred music was his all-time favorite, and he served as a choir director at his church in New Bern, NC. He loved to sing and performed as a soloist on many occasions when needed. He attended and was a patron supporter of the Florence Symphony Orchestra, where he especially enjoyed watching his violinist daughter on stage. His greatest musical joy in later years was that of watching his singing grandchildren, especially when they did concerts for him. Bill was preceded in death by his parents, as well as, his sisters and their husbands: Mary Elizabeth Brinkley Carawan (John); Sarah Evelyn Brinkley Cleve (William Edward, Sr.); foster brother, William Mckinley Messick (Margie) ; daughter, Bonita Delores Brinkley Kerns. He is survived by his wife of 48 years, Mary Evelyn Yancey Brinkley; daughters: Jessica Evelyn Jones (Justin); Jennifer Marie Foxworth (Dr. Michael, II); son: Stephen Bryan Brinkley (Carrie); Grandchildren: Micah Brinkley Jones; Madeleine Elise Jones; Cailin Penny Foxworth; Lena Grace Foxworth; Eiley Marie Foxworth; Stephen Tyler Brinkley; great-granddaughter, Ava Elizabeth Brinkley. He is also survived by many nieces and nephews and their children. The funeral service will be held Saturday at 11:00 AM at Florence Baptist Temple, officiated by Pastor Bill Monroe. The burial will follow at Florence Memorial Gardens directed by Stoudenmire-Dowling Funeral Home. The family will receive friends at 10:00 AM, prior to the service at Florence Baptist Temple. In lieu of flowers, donations may be made to the House of Hope, C/O Julie Maximum, 1020 West Darlington Street, Florence, SC. 29501, or to the Frank Monroe College Endowment Fund, Florence Baptist Temple, 2308 South Irby St. Florence, S.C. 29505 Please sign the tribute wall for the family at www.stoudenmiredowling.com.

The family of William Perry Brinkley created this Life Tributes page to make it easy to share your memories.

Send flowers to the Brinkley family.