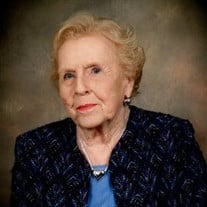 Ruth White Collins, 91, died of COVID-19 on Saturday, July 25, 2020, at McLeod Regional Medical Center in Florence, S.C. A beloved mother, grandmother and great-great-grandmother, she was an accomplished musician who used her talents as a singer, organist, pianist and composer for service to the church her entire life. Ruth was born on December 25, 1928, the only child of William Irvin Eden and Louise Evans Eden. She graduated from Florence High School (later McClenaghan) in 1946 and attended Coker College in Hartsville, S.C., from 1946-47 as a voice major. On June 26, 1947, she married George Hughes White. Ruth and Hughes had two daughters and were married for 48 years until his death in 1995. Ruth served in the music ministry of Calvary Baptist Church for over 50 years, becoming organist in 1966. In addition to playing the organ, Ruth was a member of the choir and bell choir. She also composed anthems for various choirs and handbell pieces, a number of which were professionally published. Ruth taught kindergarten at Calvary Baptist Church from 1963 to 1969 and worked for a decade at the S.C. Medical Association, headquartered in Florence. She retired from the Pee Dee Community Action Agency after 15 years, starting as a transportation coordinator and eventually serving as a job developer and youth counselor, coordinating school and summer youth programs for high school seniors. Ruth Collins was outgoing, fun-loving, competitive and always on the go. She had many interests during her life, including bowling, reading mystery novels, knitting and crocheting. She was a jigsaw and crossword puzzle enthusiast and enjoyed beachcombing for seashells on Sanibel Island in Florida. She dearly loved and took wonderful care of her many cats. After entering a nursing home in her late 80s, she continued to play the piano, entertaining residents and friends with spring and holiday concerts with her duet partner Nancy Granath. She was an avid bridge player, meeting every Friday afternoon with friends to play until the pandemic prevented them from gathering. She found joy in raising African violets and orchids and became known for her green thumb at the nursing home; other residents and staff brought her plants to nurse back to health. Ruth is survived by her two daughters, Judith White Cantey (widow of Max Cantey) of Florence and Cara White Bluford (Martin Bluford) of Mt. Pleasant; five grandchildren, Leigh Cantey Coker, Maxie Cantey, Robbie Cantey, Daniel Bluford and Mitchell Bluford, along with four great-grandchildren and one great-great-grandchild. She is preceded in death by her two husbands, George Hughes White (1995) and Robert Madison Collins (2009), whom she married in 1997. Due to the pandemic, a celebration of Ruth’s life will be planned at a later date. Memorials in her honor may be made to the Music Ministry of Calvary Baptist Church, 915 Cherokee Road, Florence, SC 29501.

Ruth White Collins, 91, died of COVID-19 on Saturday, July 25, 2020, at McLeod Regional Medical Center in Florence, S.C. A beloved mother, grandmother and great-great-grandmother, she was an accomplished musician who used her talents as a singer,... View Obituary & Service Information

The family of Ruth White Collins created this Life Tributes page to make it easy to share your memories.

Send flowers to the Collins family.