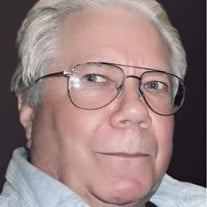 On Friday, May 7th, 2021, our hero, Kenneth Joel Pittman, fought like a titan, and gained his wings that night. His 73 years on earth were well lived. Services will be held in the mausoleum at Florence Memorial Gardens, Tuesday, May 11th, with visitation beginning at 1:00 p.m. followed by the Memorial Service beginning at 2:00 p.m. directed by Stoudenmire-Dowling Funeral Home. Ken was born on March 6, 1948, in Los Angeles, California, where he spent his childhood. After becoming a Green Beret paramedic in the 173rd Airborne, he relocated to the east coast, where he met the love of his life, Jenny. They eloped and wed shortly before his 12 month deployment to Vietnam in 1968. If you look up the history of the 173rd Airborne in 1969, you will understand why he never talked about this part of his life. He was awarded the "Air Medal" for a volunteering for a hot LZ rescue operation that had minimal chance of success. He saved many lives, dragging wounded to a helicopter while exposed to volumes of enemy fire. He had volunteered despite only having one month left on his tour. Upon his return to US he began serving in a different capacity, law enforcement. He was a career police officer for over 40 years in two states. He touched thousands of lives during his career. He was a superb shooter and a natural firearms instructor. He held a leadership role for the majority of his career. He trained dozens of police officers, improving the quality of his department one officer at a time. He retired in 2016. In his family life he was a devoted husband, and loving father, and a fun grandfather. He was the example of what a good man should strive to be. Ken enjoyed retirement and spent time building and working with his hands, and could often be found behind his wood lathe making beautiful pens. He had a soft spot for rescue and made it a habit to have three or four rescue dogs living with him at any given time. Most of all, he followed the Christian ideal of loving people, regardless of their difference. He was a protector of people because he loved people, even those who weren't like him or those he did not know. Ken is preceded in death by his mother, America Faye Pittman and father Cle Dale Pittman. He is survived by his brother, Edward Pittman of Sedona, Arizona. His adoring wife of 52 years, Jennilyn Pittman. Two sons, Kenneth D. Pittman (Sarah) of Detroit, MI and Christopher J. Pittman (Brandy) of Hartsville, SC. Ken was the proud papa of seven grandchildren; Kaylee, Lily, Isabelle, Gage, Charlotte, Lucy, and Kenna. Due to the current COVID-19 concerns, social distancing will be observed. Memorials may be made to Darlington County Humane Society, P.O. Box 1655, Hartsville, SC 29551 or drop off supplies at 1705 Adoption Way, Darlington, SC 29532 Please sign the tribute wall and send messages for the family at www.stoudenmiredowling.com.

On Friday, May 7th, 2021, our hero, Kenneth Joel Pittman, fought like a titan, and gained his wings that night. His 73 years on earth were well lived. Services will be held in the mausoleum at Florence Memorial Gardens, Tuesday, May 11th, with... View Obituary & Service Information

The family of Kenneth Joel Pittman created this Life Tributes page to make it easy to share your memories.

Send flowers to the Pittman family.