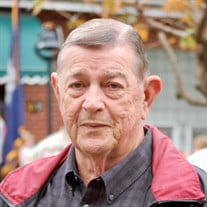 Ronald Wayne Anderson, Sr., 77, died Thursday, September 23, 2021, after an extended illness. Mr. Anderson was born on October 27, 1943, in Florence, SC, to John Monroe and Ada Mae Anderson. He graduated from Francis Marion University and was a veteran of the United States Navy, the United States Army, and the South Carolina Army National Guard with a combined 42 years of service. In 1967, Mr. Anderson began his career as a Business Systems Analyst with Union Carbide, where he worked for eighteen years. In 1985, he began a second career in Personnel Service with the Army National Guard, working until his retirement in 2003. A caring, contributing citizen of the community, Mr. Anderson gave of his time and energy to the City of Florence and its youth by serving as a coach, board member, and officer of the City Recreation Department Baseball Leagues. From Royall Field to Westminster to McLeod Park, he worked tirelessly to ensure that the youth of Florence were afforded the opportunity to play baseball in the best environment possible. In recognition of his years of service, he was awarded the Key to the City by Mayor Rocky Pearce and June 26, 1990, was proclaimed Ronald W. Anderson Day. An avid Gamecock fan, Mr. Anderson was a member of the Gamecock Club for nearly 60 years and attended many home games. He was also a devoted fan of the Atlanta Braves and loved golfing with his friends. A member of Florence Baptist Temple, he enjoyed singing in the choir and was a member of the Men’s Sunday School class. Mr. Anderson is survived by his loving wife of 56 years, Peggie Kyzer Anderson; his children, Adriane Anderson Reynolds (John) of Florence; Ronald Wayne Anderson, Jr. (Christy) of Lynchburg, VA; and Adam Monrowe Anderson (Vanessa) of Chapin, SC; his three grandchildren, who lovingly called him Paw Paw, Matthew Anderson, Suzanne Anderson, and Alek Reynolds; a brother, John Monroe Anderson, Jr. (Mary Lee) of Florence; a sister, Judy Anderson Boone of Florence; and many special nieces and nephews. A celebration of Mr. Anderson’s life will be held in the chapel of the Florence Baptist Temple on Saturday, September 25, 2021, at 2:00 p.m. directed by Stoudenmire-Dowling Funeral Home. The family will receive friends at home, 1901 Deerwood Place, on Friday, September 24 from 6:00-8:00 p.m. Memorials may be made to the Florence Baptist Temple Building Fund, 2308 South Irby Street, Florence, SC 29505, or a charity of one’s choice.

The family of Ronald Wayne Anderson Sr. created this Life Tributes page to make it easy to share your memories.

Send flowers to the Anderson family.