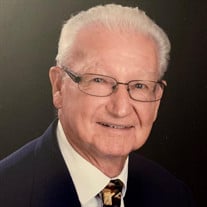 Wittie Latroska Pridgen, 87, earned a first-class ticket and boarded the train for heaven on December 6, 2020. His successful run on earth began in the cradle. Born in Florence, SC, he was the son of the late John Golden Pridgen and Allie Wells Holoman Pridgen. He was a member of the Florence High School class of 1953, where he lettered in baseball – his favorite sport. Upon graduation, he enlisted in the U.S. Army and served his country as an MP at Fort Jackson in SC, Fort Gordon in GA, and Valley Forge Medical Center and Hospital in PA. While serving in Pennsylvania, he met the woman who struck a spark in his heart and put a lifelong twinkle in his eye. Wittie married Wilma “Willie” Irene Miers in 1959 and brought his bride to Florence where they established a happy home. In 1960, Wittie embarked on a 33-year-career with what was then known as Atlantic Coast Line Railroad. Nicknamed “Bambam” by his colleagues (a reference to the sound made by the coupling of rail cars), he was certified as a locomotive engineer in 1972 and operated freight trains until his retirement from CSX in 1995. Not one to be idle, he then became a valued member of the Florence SERVPRO crew, with which he proudly worked until 2019. In the interim, life for Wittie and Willie became both a test of – and a testament to – their strong Christian faith. Together, they navigated unseen curves and dark tunnels. The tragic loss of two children, Wittie Shane and Amber Lark, brought unspeakable pain that might have spelled the demise of many a marriage. But theirs was no common marriage. The bereaved parents, lifetime members of Grace Baptist Church, looked to the Lord for comfort and leaned on one another and their church family as they faced their trials. They chose to go forward toward a life of joy and were blessed with the adoption of two children: a daughter, Cynthia Michele, in 1970, and a son, David Michael, in 1973. Wittie, an active, dedicated father, loved his children beyond measure. A selfless man, he extended many acts of kindness toward friends, family and strangers, each carried out without fanfare in keeping with his modest, unboastful nature. Wittie was also a simple man who detested waste. He religiously recycled and salvaged items, seeing usefulness where others did not. More than once, he demonstrated the incredible life span of a fast-food Styrofoam coffee cup, which he would reuse for months at a time. While his idea of a perfect night out often revolved around grabbing a burger, he would graciously bow to his wife who envisioned something a little more refined. His successful run here might be finished, but Wittie’s legacy of love lives on. In addition to Shane and Amber, he was preceded in death by his parents, two brothers, Carlton LaRue Pridgen and Kent Arkle Pridgen, and a sister, Plinktee Milvee Godwin. He is survived by his beloved wife, Wilma, daughter Michele Pridgen (Libby) of Florence, son David Pridgen (Susan) of Darlington, grandson Garrett Michael Pridgen, step-granddaughters Nina and Mia Wiersema, great-grandson, Charles Jordan Wiersema, a sister, Mary Latrelle Dixon of McBee, and many beloved nieces and nephews, including Denise and Greg Breslow, with whom he enjoyed a special relationship. Family and friends are invited to pay their respects to Mr. Pridgen from 10 a.m. to 4 p.m. on Wednesday, December 9 at Stoudenmire-Dowling Funeral Home. Due to COVID concerns, the family will not be in attendance. Graveside services with military honors will be held at 11 a.m. Thursday, December 10, 2020 at Florence National Cemetery. Social distancing protocols will be observed and there will be no gathering following the service. Memorials may be made to Grace Baptist Church, 2400 W. Third Loop Road, Florence, SC, 29501. Condolence messages for the family may be posted at www.stoudenmiredowling.com.

Wittie Latroska Pridgen, 87, earned a first-class ticket and boarded the train for heaven on December 6, 2020. His successful run on earth began in the cradle. Born in Florence, SC, he was the son of the late John Golden Pridgen and Allie Wells... View Obituary & Service Information

The family of Wittie Latroska Pridgen created this Life Tributes page to make it easy to share your memories.

Send flowers to the Pridgen family.