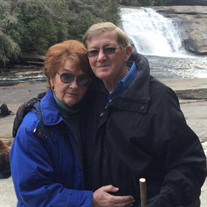 Wayne Millard McGee, 80, of Effingham, SC, passed away on Wednesday, June 23, 2021. He was born a little over a year before the attack on Pearl Harbor, on August 20th, 1940. In 1945, while his father Willard McGee was on a Navy Ship headed to the war, he, his mother and two sisters, the late Phyliss Poston and Cheryl Powell, heard the sound of many car horns blowing simultaneously. Only five years old, he asked his mother “why are all those people blowing their horns?” Mrs. Dorothy McGee told him “the war is over”. He was a teenager in the golden age of the 1950’s. He listened to all those songs of that time like, Rock around the Clock, All Shook Up, and Great Balls of Fire. Like the stereo typical teenager of that time, he went through many old junk Model A, and Nash Rambler type cars, and had the wanderer spirit within him. He had hopes and dreams of going to Hollywood, and becoming like one of his cowboy heroes like Lash LaRue, until he placed all those things aside when he fell deeply in love with a Miss Mary Clair Tanner. A friend of his sisters, they met at church, which is the best place to find a spouse obviously, because it resulted in 57 years of marriage. As often, he was without transportation, he would walk the dirt road called Third Loop Road, from Westminster Drive to the corner of now Third Loop and Irby Street, where Miss Tanners parents owned a gas station. He frequented her so much that the local Third Loop Road farmers nicknamed him, “hot foot”, which those who are still alive refer to him today. They were married on March 8, 1964, because Grandma Tanner would not allow her to be married until she was 18 years old. She turned 18 on March 7th, 1964. Now married, he decided to end his wandering, and started a long career working for Asplundh Tree Company in which he worked off and on for 42 years. He was a company man through and through. We had a saying in our family, that we bled Asplundh Orange. He worked many major snow and ice storms and hurricanes. Hurricane Katrina would be his last storm before retiring. As life goes, in 1966 he had a daughter, and they named her Tamera. In the early 1970’s, a young preacher named Bill Monroe, stopped at his work zone and invited him to the Florence Baptist Temple. They already had one family member attending FBT, and with Mrs. Elsie Tanners help, they became members. They tried to have more children but did not have any success, until eight years later in 1975, they were surprised to find out they were having a son. They named him Timothy. Now with his life well founded on biblical principles he continued to raise his family, serve his God, and work his job. Later he was blessed of God with a grandson Timothy Avery McGee in 2003 and in 2005 his granddaughter Alyssa Marie McGee. About 10 years after the birth of his granddaughter, he started showing symptoms of vascular dementia. In February of this year, he started declining quickly. The last two months of his life he required 24 hour care until he ultimately passed, moments after pastor Monroe prayed for him. Mr. McGee is survived by his wife, Mary Tanner McGee; son, Timothy W. McGee (Deanne) of Florence; daughter, Tamera Bowling (Terry) of Florence; grandchildren, Timothy “Avery” McGee and Alyssa Marie McGee; and sister, Cheryl Powell of Effingham. The family will receive friends from 10:00 – 11:00 AM on Saturday, June 26, 2021, at Florence Baptist Temple Chapel. Funeral services will be held at 11:00 AM on Saturday at Florence Baptist Temple Chapel. Burial will follow at Mount Hope Cemetery directed by Stoudenmire-Dowling Funeral Home. Please sign the tribute wall for the family at www.stoudenmiredowling.com.

Wayne Millard McGee, 80, of Effingham, SC, passed away on Wednesday, June 23, 2021. He was born a little over a year before the attack on Pearl Harbor, on August 20th, 1940. In 1945, while his father Willard McGee was on a Navy Ship headed... View Obituary & Service Information

The family of Wayne Millard McGee created this Life Tributes page to make it easy to share your memories.

Wayne Millard McGee, 80, of Effingham, SC, passed away on Wednesday,...

Send flowers to the McGee family.