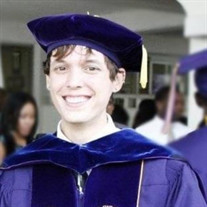 Steven “Blane” McCracken, PhD, 39, of Florence, passed away on Saturday, July 10, 2021. Blane was born on November 5, 1981, the son of Rita Buckles McCracken and Steven Vaughan McCracken. He graduated from West Florence High School with honors in 2000. He was a member of the West Florence Orchestra where he played first violin. He attended Francis Marion University and graduated May 8, 2004. He graduated Summa Cum Laude with University Honors majoring in Physics with minors in Music and Math. He was a member of the FMU Jazz Band; a member of Sigma Pi Sigma (National Physics Honor Society; Omicrom Delta Kappa (National Leadership Honor Society); FMU Math Club; student vice-president FMU Phi Kappa Phi Chapter and he represented zone 5 and worked in the FMU Math Lab. He received the Physics Award in 2004; Duane P. Myers Honors Award; Scholastic Achievement Award; William H. Blackwell Award. He was the first student in FMU history to receive a fellowship from Phi Kappa Phi. He was in Who's Who in American Universities and Colleges. After taking a two-year sabbatical, Blane attended Louisiana State University in Baton Rouge and graduated with a PhD in the field of Physics. While attending LSU he completed internships at Montana State University on Solar Physics; at Redondo Beach, California for the Government and presented one of his research papers in Japan; where he was offered a position in the area of research. Blane was an accomplished musician who played violin, piano, keyboard, and guitar with the local bands Flow Town and recorded a CD with Omega Theory. He also played drums, flute, saxophone and composed his own music. He played in the Florence Symphony Orchestra from 1997-2003. Blane had a strong desire to learn and was fascinated with trying to understand everything about the physical world around him. As a child he built a working hover craft, solar power cars and went through many physics kits. He enjoyed flying remoted control airplanes, chess, and he earned his pilot’s license. Other hobbies included flying airplanes, surfing, archery, photography, and computers. As a young child he became infatuated with computers. He taught himself computer skills from building them to programming them. He was very “tech savvy” and could solve very complex computer problems easily. After graduation he worked for Pinnacle Network Solutions, Hill South IT Solutions, and was IT Director for Associate Assets Recovery. He is predeceased in death by his Maternal grandparents Ernest and Lena Mae Buckles and his Uncle Duke Buckles all of Kingstree. Also by his paternal grandparents Vaughan and Carolyn Ford McCracken of Kingstree. In addition to his parents, he is survived by his wife, Kayla Douglas McCracken; his sister, Shannan McCracken Banning (Benjie); nephew, William Banning; niece, Lena Wrenn Banning all of Florence, his daughter Raven Adalee’ McCracken of Marion; his uncle, Michael Buckles of Garden City Beach and Bill Odom also of Garden City Beach. Blane had a beautiful contagious smile and a good sense of humor. Although somewhat shy, he had the biggest loving heart and desire to help everyone. He was a loving husband, son, brother, and uncle. He made many life-long friends and was liked by all. He was very loved by family and friends and will be Greatly Missed. Family is being assisted by Stoudenmire-Dowling Funeral Home and services will be private. Memorials may be made to a mental health facility of your choice. Please sign the tribute wall for the family at www.stoudenmiredowling.com.

The family of Steven "Blane" McCracken, PhD created this Life Tributes page to make it easy to share your memories.

Send flowers to the McCracken, family.