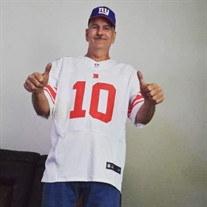 Our beloved husband, father, Pop-Pop entered into eternal rest surrounded by his family on 2/25/22. Bob was our hero, he fought cancer so hard for the past several years. We can only imagine the homecoming that he received from his parents and all the loved ones who passed before him. Bob was born on Jan 21, 1957 to Robert and Shirley Fitts in Key West Florida. He was the best Big Brother to Pam Fitts (John) and Paula Wharton (Joe). Bob grew up in Stamford, CT and worked for Clairol for 31 years. He served in the US Army and was stationed in Germany where he met his beautiful wife, Connie. Bob and Connie had a love affair to last forever and just celebrated their 44th wedding anniversary. They were blessed with five beautiful daughters, Jessica DelValle (Eddy) Stephanie Fitts (Kevin), Kelle Quinn (Ray), Caitlyn Fitts (Shaq), Monika Fant (Alex) and a bonus daughter Tanya Szarmach. He also had the enjoyment of his grandchildren, Lance, Keryna, Emaleigh, Angelyna, Connor, Amelia, Austin, Charlotte, Bonus granddaughter Destiny and great granddaughter Harper. In addition to those that will miss him in the US, he will be greatly missed by his extended family in Germany. Bob had a love for family time. He enjoyed fishing, bowling, swimming in the family pool and most importantly, was the biggest NY Giants Fan. Football nights were the greatest nights spent together. We are so grateful we got to spend this life together and although you are no longer with us in body, we know you will always be here in spirit. A love like ours never dies! We would like to extend our greatest thanks to Dr. Rao and staff at McLeod Oncology for never giving up, to McLeod Hospital ICU and Chaplin for your grace during Bob's final moments and to Stoudenmire-Dowling Funeral Home for assisting with Bob's final arrangements. A private celebration of life will be held with Immediate family.

Our beloved husband, father, Pop-Pop entered into eternal rest surrounded by his family on 2/25/22. Bob was our hero, he fought cancer so hard for the past several years. We can only imagine the homecoming that he received from his parents and... View Obituary & Service Information

The family of Robert "Bob" Alan Fitts created this Life Tributes page to make it easy to share your memories.

Send flowers to the Fitts family.