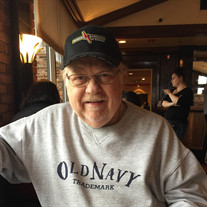 Michael Tracy Dudgeon was born on September 5, 1946 in Gambier, OH to his late parents, George and Burdetta Dudgeon, the youngest of five children with a head full of red hair and bright blue eyes. He served his country with honor for six years in the United States Army from 1967-1972. Michael went on to marry the love of his life, Mary Jo Bugner, on April 12, 1969 at St. Wendelin Catholic Church in Fostoria, OH. Their wedding could only be matched in joy when the other four loves of his life, Meghan, Madison, Morgan, and Mia, were born. Michael entered into eternal rest on July 7, 2021. He is preceded in death by his parents; sister, Beverly; brothers, Rodney and Darryl; and beloved dogs, Maggie, Bailey, and Lucy. He is survived by his close family in Florence, SC; his wife, Mary Jo; daughter, Meghan Terry (Mike Smith); three granddaughters, Madison, Morgan, and Mia; and former son-in-law, Brian Terry. He is also survived by his second eldest brother, Daniel (Shirley), of Gambier, OH. He will be dearly missed by his numerous family members and friends over the many decades of his illustrious and well-lived life. Michael was a man of many hats, literally and figuratively, but he would tell you his most favorite were Husband, Dad, and Papa. There wasn’t a single place he could travel where he couldn’t find a fantastic burger or deli, antique store to peruse around, and most importantly, Dunkin’ Donuts coffee. However, his favorite place to be was at home, surrounded by his beloved daughter, granddaughters, and wife, sharing stories, jokes, and memories. He had a great love for animals; loved bird-watching for his favorite red cardinals, dog-sitting his granddog, Bella, and grandcat, NiNi, and even raising some birds of his own. He even let his granddaughter bring in a stray kitten to live in his office while he helped her nurture and raise it. He had immense creativity for interior design which he utilized throughout his careers in paint, home decor, and wall covering. For over fifty years, Michael loved antiquing and selling vintage furniture with his wife. Although quiet and reserved at first meeting, it would not take long to become a dear friend of his and learn a few of his many noteworthy stories and funny jokes, too many to count. There are not enough words to encapsulate how wonderful of a Papa, Dad, and Husband he was or the love and devotion he shared for his beloved wife, daughter, and granddaughters. He will be so dearly missed by all. A Catholic Mass celebrating Michael’s life will take place Thursday, July 29 at 12PM at St. Ann’s Catholic Church in Florence, SC. There will be a rosary recited at 11:30AM before mass and a small luncheon following the service in the parish hall. In lieu of flowers, donations may be made to St. Ann’s Catholic Church Youth Faith Formation, 113 South Kemp Street, Florence, SC 29506 or the National Kidney Foundation of South Carolina, 701 Gervais Street, Ste 150- 195, Columbia, SC 29201.

Michael Tracy Dudgeon was born on September 5, 1946 in Gambier, OH to his late parents, George and Burdetta Dudgeon, the youngest of five children with a head full of red hair and bright blue eyes. He served his country with honor for six years... View Obituary & Service Information

The family of Michael Tracy Dudgeon created this Life Tributes page to make it easy to share your memories.

Send flowers to the Dudgeon family.