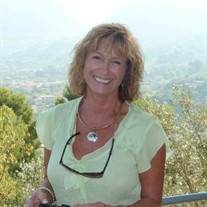 Margaret “Peggy” Keels Stokes, passed away on Tuesday, June 1, 2021, in Mt. Pleasant, SC at Roper Hospice Cottage surrounded by her family after a battle with Alzheimer’s. Peggy was the wife of Dr. Julius Howard Stokes, Jr. from Florence, SC. She was the daughter of the late Henry Cole Keels, Jr. and the late Dessie Lee Keels of Florence. Peggy was born on April 29, 1944 in Lynchburg, SC and grew up in Florence. She graduated from McClenaghan High School, where she was voted “Most Popular” in her Senior Class, and attended Winthrop College. Peggy and J. were married on September 12, 1964. Peggy was a devoted daughter, wife, mother, cherished Mimi, caring sister, and adoring aunt. She had a sweet smile and a caring nature. Her greatest pleasure was spending time with her family, (especially her three grandchildren) loving, guiding, and caring for each one. She loved the beach, art, music, dancing, gardening, and traveling. Peggy was also a beautiful and talented artist. She was a generous and giving lady, and never met a stranger. Peggy taught 4th and 5th grade at First Baptist Church in Charleston before moving back to Florence. While living in Florence, Peggy was a member of First Baptist Church and later Central United Methodist Church. She was an active member of the United Methodist Women of Central United Methodist and on the Board of Trustees. Peggy also served in numerous clubs and organizations in the Florence area. Some of those included: volunteering and serving on the Board at McLeod’s Regional Hospital and President of the Medical Wives Auxiliary, she was on the Board of the Methodist Manor, Pee Dee Speech and Hearing Center, and Lighthouse Ministries. She was a member and officer of the 4:00 Garden Club, the Junior League of Florence, the Florentine Society, the Revelers Dance Club, the Belalikan Dance club and the “Maybe, Maybe Not” Bridge Club. Peggy was instrumental in beginning the SC Arts council in Florence and served as their first Executive Director. Peggy and her husband moved to Georgetown in 2002. She was a member of Duncan Memorial United Methodist Church where she served on the Board of Trustees, was a longtime member of the United Methodist Women Group, the Trinity Sunday School class, and the Altar Guild. She served for a number of years on the Duncan Nurture and Outreach Committee. She was also very active in her community serving on the Board of the Pawley’s Island Festival of Music and Arts, including the Pawley’s Island Wine and Food Gala, the Lowcountry Garden Party and Culinary Symphony. Along with her parents, Peggy was predeceased by her son, Julius Howard Stokes, the 3rd; a sister, Shirley Lynn Keels; and a brother, William Clyde Keels. In addition to her husband J., she is survived by her daughter, Michelle Stokes Blackstock; son-in-law, William Edward Blackstock; three grandchildren, Chase Stokes O’Reilly, Margaret Neeve O’Reilly, and Stokes McCade O’Reilly; two sisters, Kim and Robin, and many loving nieces and nephews. A memorial service will be held at 3:00 PM, Sunday, June 13, 2021 at Central United Methodist Church in Florence with Rev. Dora Gafford and Rev. Thomas Smith officiating. Prior to the service the family will receive friends from 2:00 - 3:00 PM in the Commons Area of the church. To view the service live streamed, go to https://youtu.be/JTx8qHbz8sw. The family would also like to thank the staff from Roper Hospice Cottage in Mt. Pleasant for the loving care of Peggy in her last week of life. Stoudenmire Dowling Funeral Home, Florence, is in charge of arrangements. In lieu of flowers, donations in her memory can be made to the Pawley’s Island Festival of Music and Art, to the Peggy K. Stokes Scholarship Fund at PIFMA, PO Box 1975, Pawley’s Island, SC 29585, or to the Francis Marion University Stokes Family Scholarship Fund - Peggy K. Stokes - , Fine Arts at Francis Marion University, PO Box 100547, Florence, SC 29502.

Margaret &#8220;Peggy&#8221; Keels Stokes, passed away on Tuesday, June 1, 2021, in Mt. Pleasant, SC at Roper Hospice Cottage surrounded by her family after a battle with Alzheimer&#8217;s. Peggy was the wife of Dr. Julius Howard Stokes, Jr.... View Obituary & Service Information

The family of Margaret "Peggy" Keels Stokes created this Life Tributes page to make it easy to share your memories.

Send flowers to the Stokes family.