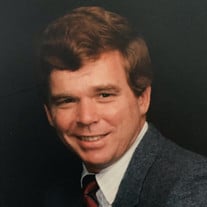 Lindsey Compton Speer, of Florence, SC, passed peacefully on May 23, 2021 at McLeod Hospice House, Florence SC. Lindsey Compton Speer was born in Washington DC at Sibley Hospital, son of Mary Hollins Speer and Bernard Ashley Speer. Lindsey and the Speer family were long term residents of Fairfax County, Virginia where Lindsey attended schools in Springfield, VA, and graduated from Lee High School, Class of 1968. Upon graduation, Lindsey enlisted in the United States Air Force in 1969 and served through 1973. He was a Communication’s Specialist and his duty stations included tours of the Philippines, Spokane WA and finally Greenland. Returning home, he began a long career with Xerox Corporation – starting in the Distribution Center in Springfield VA and completing his career at the Service Center in Clearwater, FL. A passionate sports fan, Lindsay developed a love for baseball early in life, played from Little League to High School as a “Left-Handed pitcher” and earned his lifelong moniker of “Red”. His love for the game continued as he became an enduring fan of the Washington area teams, including “the old Senators”, now the Minnesota Twins, and the Washington Redskins football team. He could always be counted on to quote sports’ stats of all his favorite pitchers and game players. And everyone knew to never call him during his team game time - he would not answer! He became an avid bowler in high school and played with Springfield Bowling Team Leagues He also enjoyed golf with colleagues and friends across Virginia and Myrtle Beach courses. In 2015 Lindsey chose to relocate to Florence, SC his quest for a “peaceful & quiet” retirement community with a small-town atmosphere. He enjoyed his life there until his passing. Lindsey was predeceased by his parents, Mary Hollins Speer and Bernard Ashley Speer of Springfield, VA. He is survived by his two sisters and a brother, Susan Speer (Jamie) Hughes of Vienna, Brian (Connie) Speer of Morrisville, NC, Gretchen Speer (Buddy) Anderson of Mt Pleasant, SC; two nieces and two nephews, Kimberly C. (Marlon) Maldonado of Charleston, SC, Brian (Kelly) Anderson of Mt Pleasant, Kelly Speer (Bill) Marchese of Durham, NC, Kirk (Natalie) Speer of Oviedo, FL and numerous great nieces and great nephews. The family would very much like to thank Lindsey’s friends and neighbors at Hunter’s Creek for their care and concern during his residence. Their friendship meant so much to him and his family A special thanks to Lindsey’s medical Team at McLeod Hospital for the care and referral to the McLeod Hospice House in Florence, SC. The McLeod Hospice House group lovingly cared for Lindsey and his family during his last days. He was at peace. After his intermittent at the National Cemetery Florence SC, a private family Celebration of Life will be held when all Lindsey’s family can gather. In lieu of flowers his family suggests a donation to McLeod Hospice House, P.O. Box 100551, Florence, SC 29502 or your local Hospice. Also when you have time to watch the next Minnesota Twins baseball game, be sure to cheer them on to win. Lindsey would like that.

The family of Lindsey Compton Speer created this Life Tributes page to make it easy to share your memories.

Send flowers to the Speer family.