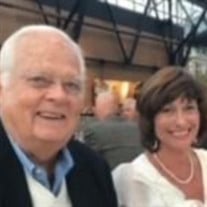 Dr. Julius “J” Howard Stokes, Jr. passed away after a short illness at MUSC on August 29, 2021, in Charleston, SC. He was the son of the late Dr. J. Howard Stokes, Sr. and Helen Rhoad Stokes. He was predeceased by his beautiful wife, Peggy Keels Stokes on June 1, 2021, and their son, J Howard Stokes, III “Trey” , who passed away at age 12, in 1982. J was born September 20, 1940 in Florence, SC, attended school there and graduated from McClenaghan High school in 1958. He was active in scouting activities and became an Eagle Scout in 1955. Following graduation, he and his best friend went to Quebec, got on a ship with 1200 other students, and went to Europe, biking through countries, climbing a mountain in Denmark, and staying at youth hostels. The travel bug had bitten him. J spent his summers lifeguarding at N. Myrtle Beach, and between college and lifeguarding, met hundreds of people who became close friends, professional friends, and patients that stayed with him throughout his life. He graduated from Wofford College in 1962 with a BS in Biology. While at Wofford, he was a member of the Wofford Glee Club and the Kappa Sigma Fraternity, serving as a member and officer. After Wofford, J attended the Medical College of South Carolina and graduated in 1967 with an MD degree. He did his internship at Lankenau Medical Center in Philadelphia, PA and then began his residency in Ophthalmology at Wills Eye Hospital in Philadelphia. When his medical training was interrupted by the war in Vietnam, he was commissioned as a captain in the US Army. While stationed at Fort Rucker Army medical center in Alabama, he served as Chief of Opthalmology and as an instructor of ophthalmology at the medical training school for flight surgeons for the Army and Air Force. After his discharge from the Army, he returned to Philadelphia to complete his Ophthalmology residency and then returned to Florence where he practiced with his father and his two brothers, Hunter and Parker. Before he retired, two of Hunter’s sons had joined the practice, Hunter Jr. and Mark Stokes. He loved the dynamic of practicing with his family members, was highly regarded in his field, and greatly loved by his patients. He also served as President of the Florence Medical Society. Throughout his life, J quietly helped people from the sidelines. He was a generous, and often anonymous, philanthropist and benefactor. In 2002, “Dr. J” retired and he and Peggy moved to Georgetown, SC to start another chapter of their lives. He had so many friends from all walks of life in all areas of the country. He never missed the chance to visit. Spending time with family was important to him. He loved when his brothers both retired from medicine so they could all be together. He was a frequent spectator at the Kentucky Derby and Mardi Gras. He loved fly fishing, deep sea fishing, hunting in Louisiana and Canada, but most important was traveling with Peggy, their daughter Michelle, and her family. He and Peggy loved traveling to Europe but were always happy to return home to the lowcountry. He was known to his friends as the consummate entertainer and storyteller. After retirement, J was able to indulge his love of arts and crafts and was quite an artisan. He loved to build elaborate models of castles, cars, birds, and anything that came to his mind at that time. He loved puzzles and trivia and was an unabashed fan of Jeopardy. J was an avid beekeeper during the last 7 years of his life. He, Michelle, and Ed would spend entire days at the little house or down at the dock by the river “spinning golden honey”. He was a strong believer in land conservation and worked with several conservation groups helping them to achieve their goals. He loved to get on his tractor and plow fields, plant crops, and especially work his large garden and keep his little bit of the world running on track. His favorite pastime after doing all that was to take his family, or just Peggy, for a ride on “The Flounder,” his boat known far and wide along the Great Pee Dee River. In his 81st year, he was as ready to experience life as he was in his teens, always looking for new ideas and new memories to create. J is survived by his loving daughter, Michelle Stokes Blackstock; son-in-law, Ed Blackstock, and his 3 grandchildren, Chase Stokes O’Reilly, Margaret Neeve O’Reilly, and Stokes McCade O’Reilly; two brothers, Dr. Hunter Stokes, Sr. (Patsy) and Dr. Parker Stokes (Jaime’); two sisters-in-law, Robin Keels and Kim Keels Nelson, and many loving nieces and nephews. He was a wonderful and loving husband, father, “Poppy”, brother, and uncle. He also leaves behind an entire community of friends, loved ones, and patients whose lives he touched on a daily basis. A celebration of life will take place at 2:00 PM on Saturday, December 18, 2021, at Central United Methodist Church. Interment will follow at Mount Hope Cemetery directed by Stoudenmire-Dowling Funeral Home. The service will be live streamed at https://youtu.be/77O8vt2nicQ. There will be a reception with the Stokes family from 12:30-1:30 PM at the Church on Saturday. In lieu of flowers, donations in his memory may be made to the Francis Marion University Stokes Family Scholarship Fund - Julius Howard Stokes, Jr. at Francis Marion University, PO Box 100547, Florence, SC, 29502.

Dr. Julius &#8220;J&#8221; Howard Stokes, Jr. passed away after a short illness at MUSC on August 29, 2021, in Charleston, SC. He was the son of the late Dr. J. Howard Stokes, Sr. and Helen Rhoad Stokes. He was predeceased by his beautiful wife,... View Obituary & Service Information

The family of Julius "J" Howard Stokes Jr. created this Life Tributes page to make it easy to share your memories.

Send flowers to the Stokes family.