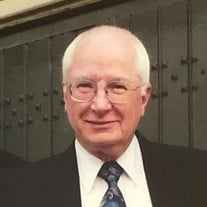 JAMES RICHARD WAINSCOTT was born at Elsmere, Kenton County, Kentucky, on February 28, 1941, son of Robert Porter Wainscott, II and Margaret Eleanor (Fisk). He was raised in Kenton County, Kentucky, and attended local public schools there. He attended the Simon Kenton High School where he played the trumpet & was Class President to become a 1959 graduate. He then attended the University of Kentucky where he received his Bachelor of Science degree in Commerce on August 8, 1963. Jim enlisted in the U.S. Army National Guard in Cincinnati, Ohio, on November 10, 1964. He served as a Private E-2 in Company G, HIT Bn. After 5 years service, he was Honorably Discharged on December 31, 1969. He married Miss Shirley Lee (Eastham) at Wyoming, Hamilton County, Ohio, on October 20, 1967. After their marriage, Jim & Shirley lived in Cincinnati, Ohio & Covington/Independence, Kentucky, where their two children were born. Later, he lived in Mt. Pleasant, SC where he worked for the U.S. Gov't Printing Office as a Contracting Officer in Charleston, SC during the 1988-2002 range. After retirement, he moved to Newnan, GA, to be near his son, and later moved to Florence, SC, in summer 2016 to be near his daughter and family, and here he spent the last 5 years of his life. He is survived by his wife of 53 years, Mrs. Shirley Lee (Eastham) Wainscott, and his two beloved children, Dr. Valorie Florence (Wainscott) Kern-Barrett (wife of Dr. Michael Wayne Barrett) of Florence, SC & James Bradley Wainscott (husband of Kathy Taylor Py) of Summerville, SC. He is also survived by 5 grandchildren: Dillon Porter Kern of Columbus, OH; Vivienne Leela Barrett, Varenna Law Barrett, & Virginia Leigh Eastham Barrett all of Florence, SC; & Kylie Sierra (Wainscott) Roberts of near St. Petersburg, FL; And 1 great grand-daughter, Anastasia Susan (Roberts) of near St. Petersburg, FL, which he & Shirley helped raise in their home for over 6 years. Jim is also survived by his older brother, Capt. Robert Phillip Wainscott, US Navy, retired (wife Cynthia Allen) of Dallas, GA, and his younger sister, Suzanne Wainscott (Kinman) (Jeff Wainscott) of Florence, KY, as well as many cousins, friends, and acquaintances. Jim received his Legal Assistant/Paralegal certificate from Blackstone School of Law in 05/1992. He was a Master Mason in The Grand Lodge of Kentucky F. & A.M. (Bradford Lodge No. 123) in Independence, Kentucky. In retirement, Jim served as a volunteer Guardian-ad-litem in SC & also worked with RQI as a recall specialist in GA & SC. Jim had a bilateral pontine stroke in 03/2021, and he spent the last two months of his life in local rehab & hospital care. He had a sudden decline while at Presbyterian Communities Rehab on the morning of Tuesday, May 25, 2021, and was transported to MRMC ER in Florence, Florence County, South Carolina, where he died with his wife at his bedside. Visitation will be held from 6 – 8 pm Friday, May 28, 2021 at Stoudenmire-Dowling Funeral Home in Florence, SC. Graveside services will be held at 2:00 pm Saturday, May 29, 2021 at Mt. Hope Cemetery, Florence, Florence County, South Carolina. Please sign the tribute wall and send messages for the family at www.stoudenmiredowling.com.

The family of James Richard Wainscott created this Life Tributes page to make it easy to share your memories.

Send flowers to the Wainscott family.