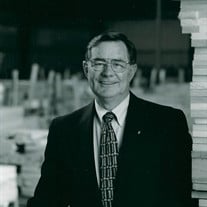 J. Laverne Ard, 85, of Pamplico, went home to be with the Lord on Saturday, January 16, 2021. Mr. Ard was born a son of the late Gertrude Hughes Ard and J. Samuel Ard. In addition to his parents, he is preceded in death by his brother, Jimmy Ard; sister, Janice Ard Clark; and step-daughter, Michelle Hanna. He is survived by his wife, Martha Cain Ard; sons, Andy Ard (Karla) and David Ard; daughter, Becki Hudson (Byron); step-son, Stanford Hanna (Dede); four grandchildren and eight great-grandchildren. He would be quick to tell you that he and God defeated open heart surgery, cancer and a massive heart attack. He retired from Marsh Lumber Company after 52 years and 4 months. He began his employment with Marsh hauling trash and became a Vice-President and General Manager. Laverne also served on the Executive Board, Board of Directors and was a member of the Presidents Circle Club of Marsh Furniture Company. Laverne also served on the Advisory Board for Progress Energy and on the Founder’s Board at McLeod Hospital. He served on the Pamplico Town Council for four years and was the Mayor for sixteen years. He was appointed Municipal Judge in 1993 for several years. Laverne was a Life Deacon of Pamplico First Baptist Church and served for 20 plus years. He received the Citizen of the Year Award from the Town of Pamplico on two occasions. The Achievement Award from the State Board of Educators, the School Bell Award from School District #2, as well as numerous awards from local schools and organizations including an award from the Sumter, SC Restorations Committee, and was a Mason for 60 plus years. He received an award from Florence County Council for Outstanding Recognition and Service to Florence County and The Citizens. He had a bridge and recreational park named in his honor. Laverne loved to do fundraisers for people in the area with his BBQ sauce. His motto was “Be the man you seek”. His main desire was to help someone, anyone, that he greeted and he loved everyone. Family will receive friends from 1:00 PM – 2:00 PM on Monday, January 18, 2021, at The Farm, “PaPa’s Green Acres”, 1029 Keefe Road. Funeral Service will follow the visitation at The Farm. Interment will take place at The Farm in the Ard Family Cemetery directed by Stoudenmire-Dowling Funeral Home. Due to the current COVID-19 concerns, social distancing will be observed. In lieu of flowers, memorials may be made to Fork Presbyterian Church, 2413 Highway 41 South, Fork, SC 29543 to the American Cancer Society, 950 48th Avenue North, Suite 101. Myrtle Beach, SC 29577. Please sign the tribute wall for the family at www.stoudenmiredowling.com.

J. Laverne Ard, 85, of Pamplico, went home to be with the Lord on Saturday, January 16, 2021. Mr. Ard was born a son of the late Gertrude Hughes Ard and J. Samuel Ard. In addition to his parents, he is preceded in death... View Obituary & Service Information

The family of J. Laverne Ard created this Life Tributes page to make it easy to share your memories.

Send flowers to the Ard family.