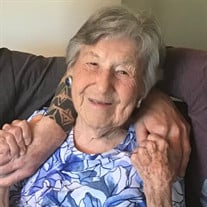 Irma Flynn Tanner passed away on Saturday, January 22 surrounded by her loved ones. She was born October 15, 1925 in Callison, SC (Greenwood County) to John Henry and Margaret Callison Flynn. She attended Bold Spring School in Callison through the seventh grade and went to Greenwood High School for her freshman through senior years, graduating in 1942. She received her associate degree in business from Lander College in 1944. She then moved to Florence where she worked at the Florence Army Air Base. In the closing days of World War II, she met Walter Way Tanner and they married on December 2, 1945. They were happily married for 36 years until his untimely death in 1982. From an early age Irma exhibited a natural talent for storytelling and entertaining family and friends. She was known in the Florence area for her role of Ouiser in the first production of Steel Magnolias at Poynor, a role in Damn Yankees, "Miss Alice" in Fruitcakes, "Miss Etta" in The Homecoming, and "Miss Maude" in Smoke on the Mountain and again in the Christmas version of Smoke on the Mountain. Along with her dear friend, Billie Spencer, they co-wrote and performed in numerous skits at their church, St. Paul United Methodist. Along with her great love of the theater, Irma also had a great humanitarian heart. She volunteered her time for many years to distribute Meals on Wheels, helped at The Manna House, and answered the phone at the House of Hope. Irma's love of family meant that she had an open door policy for her children, grandchildren, and great grandchildren. They all lovingly called her "Nana" and always knew that going to "Nana's" meant being welcomed with loving arms, a table laden with good southern food, playing cards and board games, and stories to delight and entertain all gathered. Irma was employed at C & S Bank for 15 years. She was predeceased by her parents; her husband, Walter, and her two beloved sisters, Aurelia Flynn Jordan and Ann Ella Flynn Dorn. She is survived by her children, Michael Flynn Tanner (Diana), Sharon Tanner Thames (Ross), and Susan Tanner McDaniel (Len); her grandchildren, Constance Tanner Wilson (Ned), Flynn Lees Tanner, Michael Ryan Tanner (Jennifer), Kelley Camille Tanner, Russell Flynn Thames (Sarah Brown), Walter Hewitt Thames, and Michael Len McDaniel; great-grandchildren, Joshua, Patrick, and Christopher Billinghurst, Muiryeal Thames, Makyziah Thames, Georgia Christine Brown-Thames, and Andy Shay Brown-Thames, Jake and Wyatt Tanner, Reese and Aleena Tanner, Alex Allen and Kalice Keith; two great-great-grandchildren, Ashur and Gideon Billinghurst, and step-grandchildren, Gary and Michael August, and Tina McDaniel Stewart. She leaves behind many beloved nieces and nephews, and special friends, Shirley Melton and Faye Higgs. Private services will be held. Stoudenmire-Dowling Funeral Home is in charge of arrangements. A Celebration of Life will be held at a later date. Memorials are suggested for St. Paul United Methodist Church, House of Hope, or the Manna House of Florence.

Irma Flynn Tanner passed away on Saturday, January 22 surrounded by her loved ones. She was born October 15, 1925 in Callison, SC (Greenwood County) to John Henry and Margaret Callison Flynn. She attended Bold Spring School in Callison through... View Obituary & Service Information

The family of Irma Flynn Tanner created this Life Tributes page to make it easy to share your memories.

Send flowers to the Tanner family.