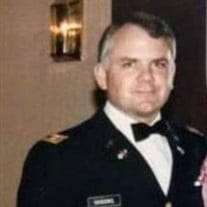 Harry Legette Huggins, Jr., 72, died at the McLeod Hospice House on January 1, 2021, after a hard-fought battle with cancer. He is survived by his wife of 48 years, Linda Triplett Huggins, and their two children, Joshua Triplett Huggins of San Diego, California, and Gretchen Faith Huggins of Florence. Harry was born in Florence on June 21, 1948, to Harry Legette Huggins and Annie Margaret Briggs Huggins. A few years later, his brother, Thomas Bryant, was born, and continues to live in Florence with his wife, Charlotte. In 1967, Harry graduated from Southside High School, where he loved playing football and was voted Best-All-Around boy in his class. He met his future wife in 1965, and always said “It was love at first sight”. He entered The Citadel in Charleston with the Class of ’71, but left to join the National Guard in 1970. After completing basic training, he enrolled at Francis Marion College, married, then graduated in 1972. In 1973, he accepted a job with Carolina Power & Light in N.C. and would remain in N.C. until returning to Florence around 2002. During his life, Harry was never afraid of challenge or change. “If you can dream it, you can do it” could have been his motto. He became a signal officer in the N. C. National Guard, designed and built a woodburning stove for his home, as well as a chimney and fireplace, from rocks he collected himself. He accepted transfers for promotions or complete job changes. He made friends with all kinds of people and would help them in any way he could. He joined civic clubs, won awards for various accomplishments, was a Boy Scout leader, operated a ham radio, took his family on memorable trips, bought cows and goats, got an engineering degree, opened a strawberry business and raised honey bees. He helped design the Beirut Memorial near Camp Lejeune Marine Base, helped start an episcopal church in Troy, N.C., worked as an assessor of storm damage to power lines in Puerto Rico after Hurricane Maria, and read hundreds of books and manuals during his life. In short, Harry was a man who was always looking for new things to learn, more interesting activities, new friends to meet and places to go. Harry, you will be sorely missed by all your relatives and friends. Here’s to a life fully lived! Because of the dangers of the COVID virus, a very private funeral service will be held on Tuesday at St. John’s Church as Harry requested. The burial at Hewitt Cemetery will follow, directed by Stoudenmire-Dowling Funeral Home, and will also be private. Friends may pay their respects and sign the register book from 10:00 AM – 4:00 PM on Monday, January 4, 2021, at the funeral home. The family will not be present. Memorial gifts may be made to the American Red Cross, St. John’s Church, or a local food bank. Please sign the tribute wall for the family at www.stoudenmiredowling.com.

Harry Legette Huggins, Jr., 72, died at the McLeod Hospice House on January 1, 2021, after a hard-fought battle with cancer. He is survived by his wife of 48 years, Linda Triplett Huggins, and their two children, Joshua Triplett Huggins of... View Obituary & Service Information

The family of Harry Legette Huggins Jr. created this Life Tributes page to make it easy to share your memories.

Send flowers to the Huggins family.