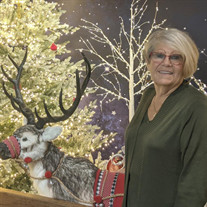 Gloria D Thoma, 71, of Ladson, SC, passed away on Friday, January 28, 2022. She was born the daughter of the late Timothy Deleon Poston and Mary Elizabeth Campbell Poston. She worked at Piggly Wiggly for 35 years as a bookkeeper. Then later... View Obituary & Service Information

The family of Gloria D Thoma created this Life Tributes page to make it easy to share your memories.

Send flowers to the Thoma family.