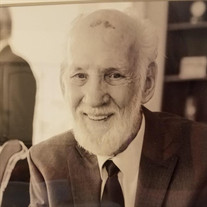 Gerald J. Biscup, 89, of Florence, passed away on Thursday, November 19, 2020. Mr. Biscup was born in Detroit, Michigan. He served in the US Marine Corps during the Korean War and retired from the Detroit Police Department after 31 years. Gerald was a member of St. Ann Catholic Church. He was preceded in death by his wife of 47 years, Mary Margaret Biscup, and by a grandchild, Stephen Hawkins. Surviving are his children, Peggy (Jeff) Hawkins of Effingham, Kathy Poupore of Livonia, MI, Tom (Debbie) Biscup of Sterling Heights, MI, and Ann (Larry) LeWalk of Redford, MI; grandchildren, Chris Hawkins, Michael Poupore, Amy Rossi, Allison Hudson, Mary Wojcinski, Kevin Hawkins, T.J. Biscup, Meghan Biscup, Katy LeWalk, Sean Biscup, and Jack LeWalk; great-grandchildren, Ryan Hudson and Juliet Hudson, and his extended family. Following his 31 years of service to the Detroit Police Department, Jerry and Mary retired to Port Charlotte, Florida, where Jerry became an active volunteer for many local organizations. Since moving to Florence in 2002, Jerry has lived his faith through his many hours of service to Manna House, Cooks for Christ, Keep Florence Beautiful, 12th Circuit Juvenile Arbitration Program and his home parish, St. Ann Catholic Church. He continued to volunteer until COVID-19 restrictions prevented him from it. Jerry is a 4th Degree member of Knights of Columbus Council 1750 in Port Charlotte; a Member Emeritus of Detroit Police Lieutenant and Sergeants Association, the Marine Corps League, and the Fraternal Order of Police, Lodge 66, in Port Charlotte. Jerry was a proud father and grandfather, and a fan of the Detroit Red Wings and Lions. He will be missed by his family, his many friends and those he served through his volunteering. Memorials may be made to Cooks for Christ, 2500 West Andover Road, Florence, SC 29501. A rosary service will be held at 5:00 pm at Stoudenmire-Dowling Funeral Home with the family receiving friends afterward until 7:00 pm on Friday, November 20, 2020. Funeral Mass will be held at 11:00 am, Saturday, November 21, 2020 at St. Ann Catholic Church. Burial will take place in Mt. Elliott Cemetery in Detroit, Michigan at a later date. Please send messages to the family at the obit section of www.stoudenmiredowling.com.

Gerald J. Biscup, 89, of Florence, passed away on Thursday, November 19, 2020. Mr. Biscup was born in Detroit, Michigan. He served in the US Marine Corps during the Korean War and retired from the Detroit Police Department after 31 years.... View Obituary & Service Information

The family of Gerald J. Biscup created this Life Tributes page to make it easy to share your memories.

Gerald J. Biscup, 89, of Florence, passed away on Thursday, November...

Send flowers to the Biscup family.