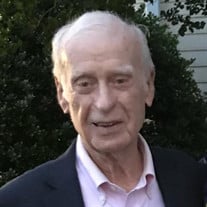 Donald Finklea Poston passed away at The Manor on September 24, 2020. He was born in Pamplico, SC on November 14, 1932, the son of Olie Poston and Maude Finklea Poston. He grew up in the depression-era, farming with his family, and learning a practical and loving approach to life, which he constantly exhibited, as a Godly man, truly embodying the second commandment of “love-thy-neighbor”. Those who knew him know he saw everyone as his neighbor, and was always willing and happy to quietly help, and make a situation better. He served his country in the US Army during the Korean Conflict, where he was deployed to Germany. As a young man from a small town, he leaned into the challenge of being deployed overseas, and enjoyed the opportunity to travel in Europe, and meet people from many diverse backgrounds. After his military service, he returned to his beloved Pamplico, and began a 38 year career with Seaboard Coastline Railway, which also afforded him the opportunity to see beyond his borders, yet return back to his home place and people, whom he loved so much. He met and married his soulmate, Ann Altman Poston, with whom he raised a family that he deeply cherished, and to whom he imparted his quiet wisdom, and steady way. He cared lovingly and devotedly for Ann through many years of declining health, and was a witness for all who knew him, as to how to love and care for people. After her passing, he was blessed to have a second chapter, and married Kathleen Cox Poston, with whom he enjoyed many years of travel and companionship. He was an active member of Pamplico United Methodist Church his entire life, where he faithfully served as treasurer for many years and a member of the John Welsey Sunday School class, was a former member of the VFW American Legion, and a member of the Retired Railroad Employees Club. He was preceded in death by his parents, his wives, and his brother Jimmy. The day after Donald’s death, his son, Britt, passed away suddenly. He is survived by his daughter, Pam Poston Harris (Tim); son, Jim Poston (Nancy); daughter-in-law, Elizabeth Poston; and his sister, Harriett Poston Hicks (Harry); six grandchildren, whom he adored: Christopher Harris (Tiffany), Emily Harris Hyman (Matthew), and Wit, Colby, Luke, and Cooper Poston; as well as two great-grandchildren, Reid Harris and Blakely Hyman, and one on the way, whom he had not yet met. Additionally, he is also survived by his beloved sisters-in-law, Connie Clifton, and Jennifer McKissick, whose husband Burnette was his fishing buddy for many happy years. In lieu of flowers, the family suggests donations to Help 4 Kids Florence, 252 S. Dargan Street, Florence, SC 29506. The family would like to express their gratitude for the dedicated and loving care provided by the staff at The Manor. Visitation with the family will be at Stoudenmire-Dowling Funeral Home on Wednesday, September 30, 2020 from 6 – 8 PM . Funeral services will be conducted at Pamplico United Methodist Church, on Thursday, October 1, 2020 at 2:00 pm with burial to follow at Woodside Cemetery, Pamplico, SC. Due to Covid-19, social distancing will be observed.

Donald Finklea Poston passed away at The Manor on September 24, 2020. He was born in Pamplico, SC on November 14, 1932, the son of Olie Poston and Maude Finklea Poston. He grew up in the depression-era, farming with his family, and learning... View Obituary & Service Information

The family of Donald Finklea Poston created this Life Tributes page to make it easy to share your memories.

Donald Finklea Poston passed away at The Manor on September 24,...

Send flowers to the Poston family.