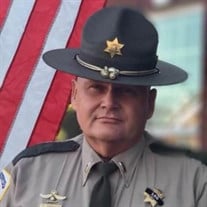 Curtis “Curt” Kershaw Summerford, III passed away on July 9, 2021 at the young age of 54 in his hometown of Florence, South Carolina. His battle with a traumatic injury showed his courage in facing life challenges with a smile. Despite the pain he endured, Curt ended his story as any hero would; by staying strong until the very end. He was born on July 10, 1966 as the youngest child of the late Curtis Kershaw Summerford, Jr. and Gisela Summerford in Florence, South Carolina. He graduated from West Florence High School in 1985, attended the University of South Carolina, and then went on to pursue his passion of law enforcement. Curt retired after 34 years as a Lieutenant with the Florence County Sheriff’s Office, in addition to the years he worked maintaining a landscaping business. Curt married the love of his life, Michelle, in 1990, with whom he had 3 beautiful children. He could often be found fixing things in his shop and was fervent in helping others in anyway he could, no matter if they were a stranger, friend, or family. No conversation with Curt was complete without a joke and a contagious smile that could brighten any room. He was a devoted father and husband, and never failed to act as a servant in his faith, all the while unequivocally providing for his family. Curt loved spending time in his recliner with Zeke, his loyal companion, at his side. Aside from his family, friends, and passion for serving his community, the most important thing in his life was his faith in his Lord and Savior Jesus Christ, which did not waver even as he suffered. He is preceded in death by his father, Curtis Kershaw Summerford, Jr; his two older brothers, Bill and J.A. Summerford, and one sister, Angela Summerford. He is survived by his mother, Gisela Summerford, his wife, Michelle Summerford, his three children, Joshua, Zachary, and Jessica, all of Florence, South Carolina; and his faithful dog, Zeke. The visitation will be held on Monday, July 12 from 5:00 – 7:00 P.M. in the chapel of Stoudenmire-Dowling Funeral Home. Funeral services will be Tuesday, July 13 at 2:00 P.M. at Palmetto Street Church of God, 3132 West Palmetto St. Florence, SC 29501 with burial services immediately following at Florence Memorial Gardens.

Curtis &#8220;Curt&#8221; Kershaw Summerford, III passed away on July 9, 2021 at the young age of 54 in his hometown of Florence, South Carolina. His battle with a traumatic injury showed his courage in facing life challenges with a smile. Despite... View Obituary & Service Information

The family of Curtis Kershaw Summerford III created this Life Tributes page to make it easy to share your memories.

Send flowers to the Summerford family.