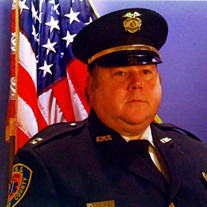 Charmon G. “Chuck” Haines, III, 62, of Pamplico, passed away on Sunday, December 12, 2021. He was born in Florence, SC a son of Alice Hampton Haines and the late Charmon G. “Tom” Haines, Jr. Chuck’s interest in public service came from watching his father and others strive to provide better fire and rescue services to the citizens of Pamplico and surrounding communities. After graduating from high school, he obtained his EMT certification and was employed by Shepherd’s Ambulance Service until Florence County EMS was formed. Chuck received his Paramedic certification in 1979 and maintained it until his death. He retired from FCEMS in 2007 and went to work for Carolina Medcare Ambulance Service until they closed. When Chuck wasn’t working for FCEMS or Carolina Medcare, he was volunteering with Pamplico Fire and Rescue. He served as Fire Chief for 20 years and was the current Director of Pamplico Rescue and Ambulance Service. Although in recent years his health had not allowed him to be as active on the ambulance, he never missed a training session and was very active in the administration of the service. Chuck had a servant’s heart and would selflessly give anything he had to anyone who needed it. From an early age, Chuck was interested in anything space related and also every aspect of computers. He was truly gifted at solving any of his friends computer issues. He was an avid “Trekkie” and Dr. Who fan who loved watching and collecting memorabilia. He was preceded in death by his father. Surviving are his mother, Alice; brothers, David Haines and Greg Haines; sisters, Mary “Beth” Haines and Laura (David) Walkup; nieces and nephews, Hunter Baxley, Matthew Haines, Jessica Haines, Emily Haines, and Anna Walkup. Memorials may be made to Pamplico Rescue and Ambulance Service, PO Box 532, Pamplico, SC 29532 or to a charity of one’s choice. The family will receive friends from 11:00 am to 12:00 noon Thursday, December 16, 2021, at Pamplico United Methodist Church with the service to be held at noon in the church sanctuary. Family will also receive friends following the service at the Pamplico Rescue Squad and at other times at the residence of his mother. Burial will follow in Woodside Cemetery directed by Stoudenmire-Dowling Funeral Home. Please send messages to the family at the obit section of www.stoudenmiredowling.com.

The family of Charmon G. "Chuck" Haines III created this Life Tributes page to make it easy to share your memories.

Send flowers to the Haines family.